Wales 1992/94 home shirt. Whilst wearing this classic Welsh jersey, the national team came within an inch (literally!) of qualifying for their first World Cup in nearly 40 years.

With less than 30 minutes remaining, Paul Bodin smashed a penalty onto the crossbar that could have seen Wales football represented at USA 94.

The Welsh 94 shirt however has been popular ever since. With its slick design including the colours of St. David’s flag, the shirt remains a favourite amongst Welsh football lovers.

Notable players to wear the Wales 1992/94 home shirt include; 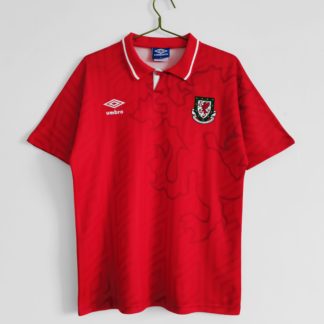