England 1982 home shirt. This v-neck classic with it’s simplistic design was manufactured by Hummel and has remained popular amongst England fans for 40 years.

Worn during the 1982 World Cup in Spain (the first in 12 years for England), England topped the group stage with maximum points after wins over Czechoslovakia, Kuwait and France.

Such was the make up of the tournament back then, England would go into a second group with Spain and West Germany eventually being eliminated after two 0-0 draws.

Be the first to review “England 1982 Home Shirt” Cancel reply 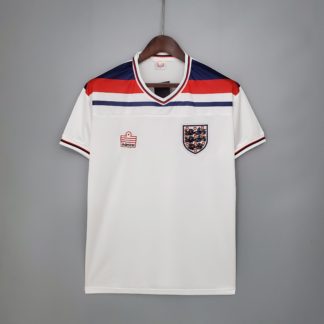