England 1996 home shirt. This jersey was worn during one of the most famous European Championships for English fans.

An Inside Forwards favourite!

This Umbro classic brings back great memories of tournament football. Whether that be Stuart Pearce celebrating his penalty against Spain in true “psycho” style or Gazza’s wonder goal against Scotland celebrated in the dentist chair, this shirt is packed full of nostalgia.

The tournament was held in England and a national team including Shearer, Gascoigne and current England manager Gareth Southgate reached the semi-finals.

Knocked out in a well known penalty shoot out against arch-rivals Germany, this England shirt will forever have good and bad memories for England followers.

Be the first to review “England 1996 Home Shirt” Cancel reply 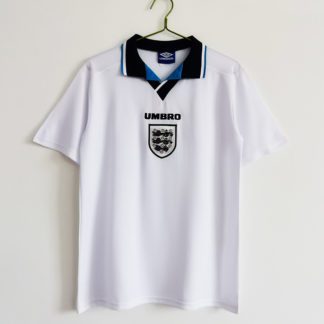