England 2002 home shirt. Worn during the 2002 World Cup in Japan & South Korea, this England shirt is another masterpiece. Manufactured by Umbro, the red line running down the side of the shirt pays homage to the cross of St George.

Although there was much hope for England’s golden era going in to the World Cup, an early exit to a Brazil side with a front 3 of Rivaldo, Ronaldinho and Ronaldo meant the shirts fonder memories were during qualification.

However, a 5-1 away win against Germany courtesy of a Michael Owen hat-trick and a stoppage time free kick from David Beckham against Greece in the playoffs ensured this shirt will always be loved by England fans.

Be the first to review “England 2002 Home Shirt” Cancel reply 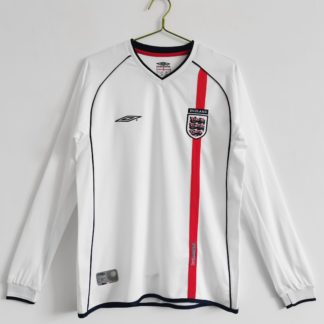